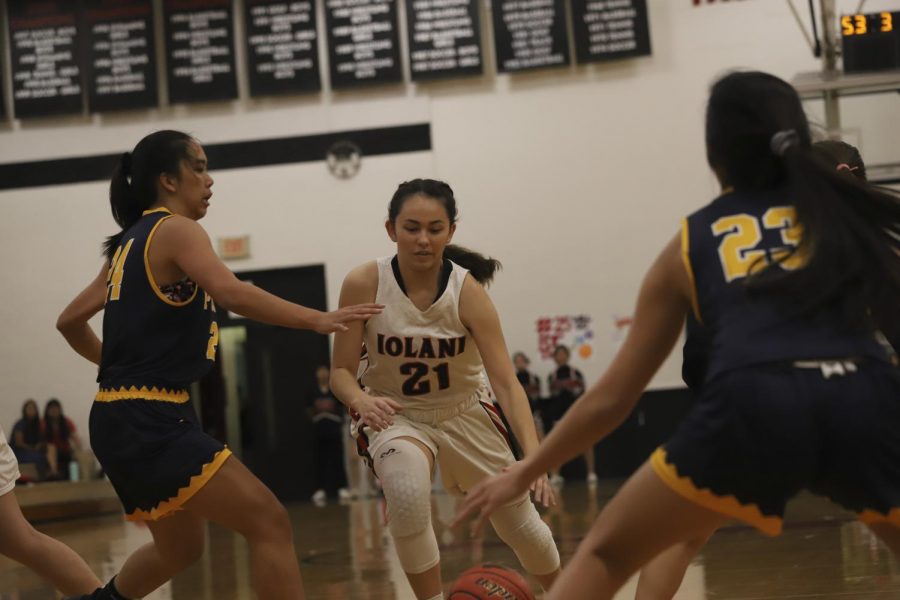 Persevering through the tough season, the Girls Varsity 1-AA Basketball Team closed their season with a home Senior Night celebration Wednesday, January 22. Facing off against the Punahou Buffanblu, both teams continuously put points on the board, and the game remained close for much of the contest. The first half saw the Raiders capitalizing on attacks to the basket and outside shooting while running a suffocating zone defense. These zones trapped attacks and led to a substantial amount of rebounds by the Raiders’ centers. The game was tied at the half with the score of 18-18. The second half featured multiple drive attacks from Myla Pellegrini ’21 and prolific outside shooting from Angela Oasay ’20. Winding down toward the final minutes of the fourth quarter, the game was on the edge with only a couple points separating the two scores. Down 42-40, Head Coach Ryan Sasaski called back-to-back timeouts in the final seconds trying to draw out game-winning plays. Unfortunately though, the last inbound pass intended for Kona Minchew ’21 slipped through her hands into Punahou’s hands. The Raiders ended up fouling, with the free throw shooter going 2-for-2, leaving a final score of 44-40.
Quickly after, seniors Kylie Higashi, Angela Oasay, Haeri Kim, and Sage Vasconcellos, were recognized by their families and friends in the stands. After a commemorative “last shot”, the senior were drowned in leis and applauded by their loved ones for their contribution throughout the season. Congratulations to the Girls Varsity l-AA Basketball team on fighting hard and playing every game with all their might.