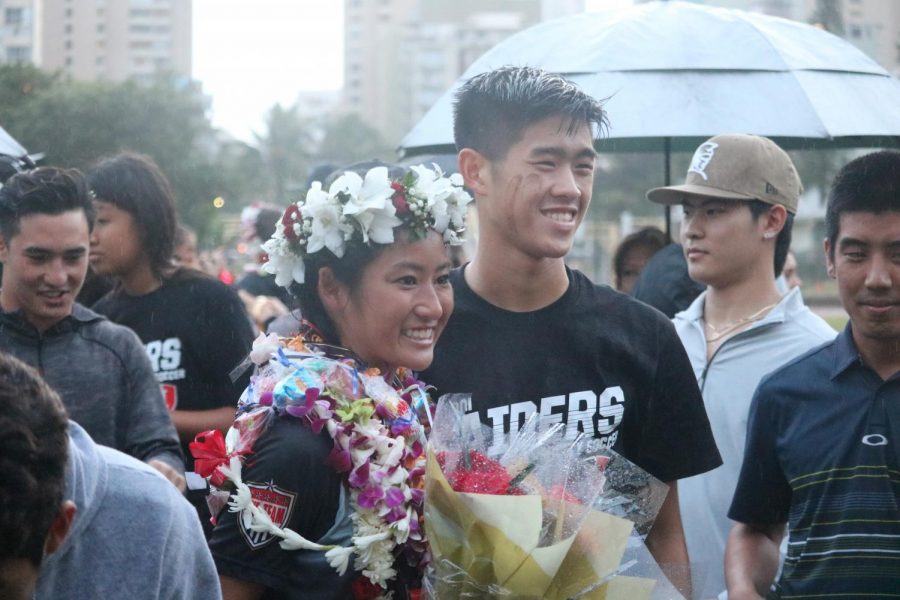 The senior members of the ‘Iolani Girls Soccer team played their final game of the season at Kozuki Stadium last Friday, January 10, losing 2-1 to Punahou.
Senior Night, an event known more for the post-game festivities than the contest itself, yielded a frenzied pace for much of the evening as the Raiders fought for an equalizer in response to a 13th minute opening goal from the opposition. ‘Iolani was on the offensive for much of the game, attempting to penetrate the stout Punahou defense. Numerous passes were intercepted and several shots were met with resistance as the Raiders pursued the back of the net. It was not until the 78th minute that the Raiders hit pay dirt when defender Kelsey Wong ’20 put home the tying goal. The resulting deadlock did not last for long as the Buffanblu snatched the lead back only a couple of minutes later in the game’s dying moments when their offense took the ball away from Lindsey Nihei ’22 only a few yards away from the penalty box. With a final close range goal, Punahou notched their win over ‘Iolani.
The loss, however, did little to mar the congratulatory atmosphere after the game as the seniors celebrated years of hard work and dedication. The season continues as the Raiders face Sacred Hearts Lancers this Wednesday, January 15. The Raiders now sit at 3-2-1, and hopes to reach another state championship are now at stake.