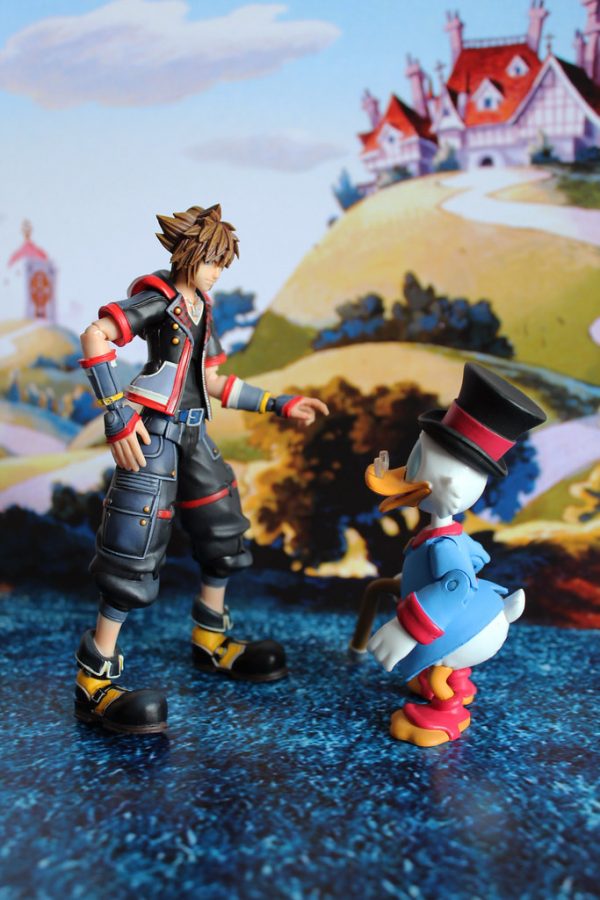 After being on hiatus for about four months, the hit Disney XD 2017 reboot “Ducktales” has made its comeback for the 2020 fall season, airing brand-new episodes. Originally a show from the ’80s, Disney has repurposed the cartoon with witty humor, new designs, and a few new characters all lovable in their own foolish ways.
For those who have not heard of the rebooted series or the beloved sound of a certain “woo-oo!” from the opening theme, “Ducktales” takes place in the city of Duckburg. It follows the story of Donald Duck’s wealthy uncle, Scrooge McDuck, who loves nothing but adventures and riches. Donald, in a frustrated and hasty panic to find someone to babysit his own nephews Huey, Louie, and Dewey, he entrusts his uncle Scrooge to take care of them for a few hours. Scrooge thinks nothing of this as he believes “family [is] nothing but trouble,” but as the series progresses and the triplets move in with Scrooge, he realizes, after all, that family is his greatest treasure. The recurring theme of the animated series is centered around the importance of family, and how deep relationships shape an individual.
On Aug. 13, co-producer Frank Angones officially posted the dates and titles for the six new episodes on Twitter. So far, each of the new episodes has shown a common theme of developing relationships between characters, including the friendship between Launchpad and crime fighter Darkwing Duck in the extended special, and the flirtatious banter between Scrooge and Goldie O’ Gilt. In regard to villains, F.O.W.L, an evil organization who wants to end Scrooge’s adventures for good, makes a more relevant appearance in the plot with “Let’s Get Dangerous!” In addition, “Escape From the Impossibin,” features F.O.W.L where the Duck family prepares for an attack from F.O.W.L. These episodes imply that the series will soon begin to reveal how this organization will be a dangerous threat to Scrooge and his family once the new wave of episodes come in next season.
I, as an avid fan of the ducks myself, was very satisfied with these brand new episodes and plots. After finishing the episode “They Put a Moonlander on the Earth,” I’m excited to see how Penumbra will adjust to her life on Earth with the rest of the Duck family. I also enjoyed seeing Penumbra’s softening attitude towards Earth and “earth-fun,” which was surprising for me as I did not appreciate Penumbra’s harsh, inhospitable personality in previous episodes.
“The Forbidden Fountain of the Foreverglades” gave Scrooge and Goldie supporters everything they asked for from this cute duck couple. Many fans, including me, were satisfied with this episode as we squealed over the adorable moments between the two. This episode was definitely a big win for the people who love the romance between Scrooge and Goldie, which is why it easily goes into my top episodes.
Also being a fan of the “Darkwing Duck” series that originally aired in 1991, “Let’s Get Dangerous!” really pulled this wave of episodes together for me. Not only was the episode extended (44 minutes compared to the regular 24), but there was bouncier, far more fluid animation to support the great emotion being narrated through Gosalyn’s difficulty accepting the loss of her grandfather. Gosalyn’s backstory involving her missing grandfather is, for the most part, the same as her original 1991 backstory. On changes, Gosalyn got a brand new look in “Ducktales,” not showing much resemblance to her original design. She is also not confirmed as the adoptive daughter of Darkwing in the reboot yet, but fans are really hoping that the hero will become her new father soon!
The “Escape From the Impossibin” was a great ride of thrill, anticipation, and emotion for fans as Webby Vanderquack was animated in full action, absolutely kicking some tail to defend and prepare her family for F.O.W.L’s imminent attack. Webby’s vast knowledge and expertise in schemes, traps, and combat were wonderfully displayed in this episode, and I would definitely be lying if I said I was not on the edge of my seat watching Webby fight!
While the majority of these episodes were great, “The Phantom and the Sorceress” was a bit of a flunk in the “Ducktales” universe. It has left me and other fans confused and disappointed with the “trust” between Lena and her aunt, who used and controlled Lena to her will in season one. Besides the flunk, Lena did unlock some new great powers, and I am excited to see how she will use it in the future.
If you are interested in binge-watching these “duck-tales,” the first and second seasons are available for streaming on Disney+ now! The third season release date is yet to be announced for Disney+, but if you can’t wait for the season’s finale, season three is ready for streaming on DisneyNOW. Or if you would prefer to dip your webbed feet into the series, the full Darkwing Duck special episode is available FOR FREE on YouTube here: https://youtu.be/3Dw44RV4-tY. Be aware that this episode does expose the secret F.O.W.L worker. Enjoy the “tales of daring bad and good!”