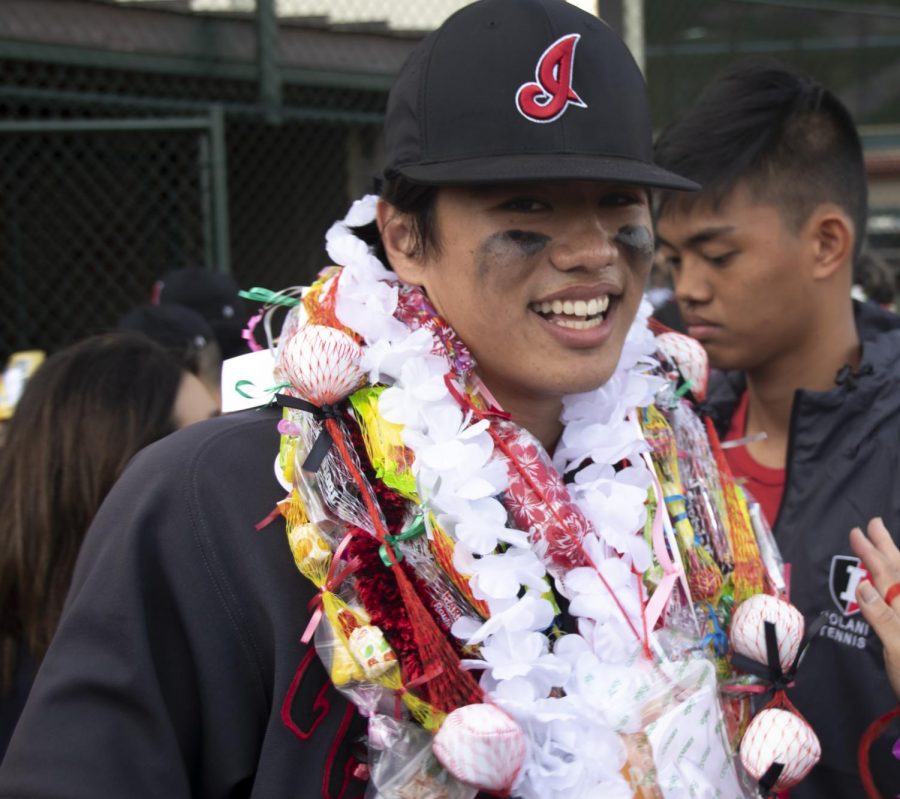 In midst of the ILH suspension of all spring sporting programs effective Monday due to increasing concerns for the spread of novel COVID-19, the ‘Iolani Varsity Baseball team faced off against the Mid-Pacific Owls in what became their first and last home game of the regular season. Despite the dangers of coronavirus, parents, friends and families of the Raiders baseball team filled up the bleachers to cheer on ‘Iolani in what became a make-shift Senior Night. The back of the bleachers were decorated with the nicknames of the seniors along with their numbers — BOGS (Logan Luke) #3, Q (Andrew Quemado) #4, JOBRO (Jonah Chong) #11, FOUR (Joshua Fournier)  #17, RAIDEN (Raiden Yamasaki) #21, SHIK (Micah Shikada) #2, GUCH (Michael Yamaguchi) #27 and ICHI (Cole Ichikawa) #6 — to honor their accomplishments.

The game was a tough one for the Owls batters as the Raiders’ starting pitcher Brayden Hiraki ’21 fired a two-hitter with 3 strikeouts. Hiraki played for all 7 innings using just 80 pitches and retired 13 of the last 15 batters, earning a complete-game win of 3-0. His mighty left-hand fastball and jaw-dropping curveballs completely dominated the game, and the crowds applauded his perfect pitches.

The Raiders veteran hitters Michael Yamaguchi ’20 and Logan Luke ’20, the fourth and fifth hitters in the order, led the scoring board, as their doubles helped the Raiders gain a lead over the Owls. Yamaguchi, a Saint Martin’s University commit, produced 1 run and 2 hits with a game-changer double on only three at-bats. Yamaguchi’s ground-rule double to left-center came out in the bottom of the first inning, allowing Kody Watanabe ’21 to score while giving the Raiders a 1-0 lead. In the bottom of the third, Luke’s two-run double scored two more runners and gave the Raiders a total of 3-0 lead. Sophomore star Tate Shimao ’22 led the Raiders’ batting with 2 hits and 1 run, as well as spearheading their stable defense as a reliable shortstop. The Raiders hitters amassed 6 hits and 2 bases on balls, forcing the Owls’ starter Kennedy Hara to be substituted out after 2.7 innings pitched. The remaining 4 innings turned out to be a stalemate, with both pitchers — Raiders’ Hiraki and Owls’ Landen Hakkei — only allowing minimal hits and runs from the batters.

Soon after their satisfying victory of the Raiders to end the season strong, each senior was introduced and embraced by their families. Despite the heartbreaking news of the suspension of the season, the seniors gave their best and were acknowledged by the supporters for their hard work. The Raiders end their 2020 regular season with a 1-1 record, in a six-way tie for second behind Saint Louis (2-0). Congratulations on the Raiders for their victory.