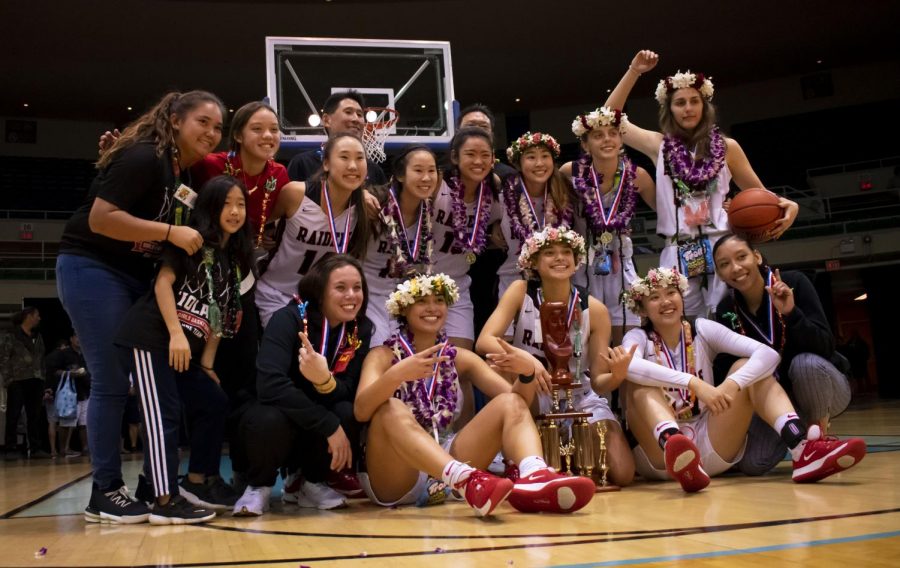 The ‘Iolani Girls Basketball team has won the Hawaii Girls Basketball Championship for the second year in a row. After claiming the ILH Championship against Maryknoll earlier this week, the Raiders defeated Moanalua (65-31), Waiakea(57-44), and finally Konawaena (55-46) in route to another black banner. On the year, the Raiders finished with a 23-2 record, and while most of the games came handily to the reigning state champs, one of their most hard-fought contests all year came in their final matchup against the Konawaena Wildcats to reclaim the title.
Under the lights of Neil Blaisdell Center with an overwhelming Raider Nation presence, the Raiders started the game off hot with seven unanswered points in the first minute of play capped off by a Kyra Tanabe ’21 and-one layup. After taking a quick 11-2 lead though, the Raiders’ offense was halted by tough play in the paint. In the final five minutes of the first period, defense prevailed on both ends as the Raiders took a 16-4 lead going into the second period.
After going up 21-6 in the start of the second period, the Wildcats began to make things interesting by going on a run of their own. Led by center Caiyle Kaupu, who put up 19 points on the night, Konawaena rallied by attacking the relatively smaller ‘Iolani team at the rim. The Wildcats went on a 14-0 run to leave the Raiders with a slim one point lead at 21-20. Still, ‘Iolani would hold on to this slim lead at the half, going into the locker room up 26-24.
They would not hold on for long though, as Konawaena would take their first lead of the night one minute into the third period off a Braelyn Kauhi three-pointer. Each side kept it close though, as after going down 30-28 a back-and-forth between the teams ensued. Neither would gain a lead larger than five points, but ‘Iolani would once again begin to mount a lead behind sisters Jovi Wahinekapu Lefotu ’22 and Lily Lefotu Wahinekapu ’21. Both led their team in scoring with more than 20 points, and Lily succeeded on the defensive end with a game high five steals. Lily would ultimately take the lead back for ‘Iolani in the final four seconds of the third period off of consecutive free throws.
By the final period it was still anybody’s game, with a 38-38 tie with 6:30 remaining in the game. The Raiders would finally pull away with 4:00 remaining on a Jovi put back layup and free throw, giving ‘Iolani a 43-39 lead. With time running out, Head Coach Dean Young implemented a chew-clock strategy to give Konawaena less time to mount a comeback. Because of this, the Wildcats would attempt to slow the game down by making the Raiders win at the foul line. Ultimately though, ‘Iolani would convert most of their free throws, only making the lead harder to overcome.
By the end of the night, the Raiders came out victorious with a score of 55-46. Cheers from the overwhelming Raider Nation came from the sidelines and the upper decks of the arena as reporters filed in to take pictures of ‘Iolani’s triumph. Today, the Varsity Girls Basketball team can celebrate their near perfect season and look forward to a very bright future.