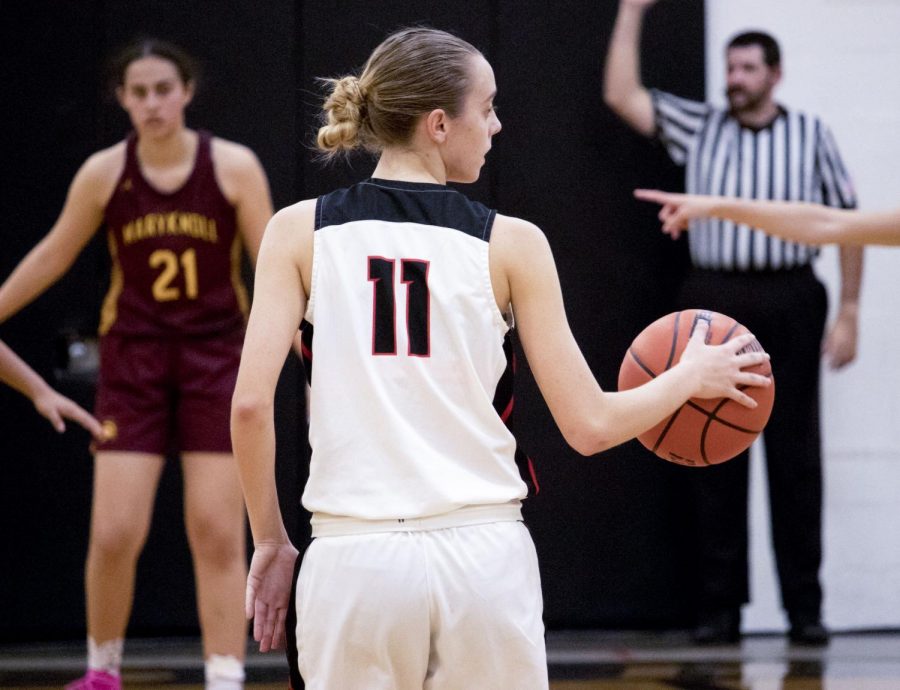 The 2019-2020 ‘Iolani Basketball programs have been a tale of two extremes this season. While the girls continued their dominance on the court, finishing the regular season 12-1 in league play, the boys team, meanwhile, have struggled under new Head Coach Ryan Hirata, going 0-11 against the ILH including their most recent loss to Punahou yesterday. However, both teams had reason for celebration yesterday, as the girls reclaimed the ILH crown before the boys celebrated their much anticipated Senior Night.

The night started off with a dominant performance by the girls to overtake Maryknoll in front of ‘Iolani’s Lower Gym. Junior Lily Lefotu Wahinekapu ’21 showed off her shooting in particular, scoring a team high 25 points to lead her team to victory. Wahinekapu’s outing was much needed, as no other ‘Iolani player scored in the double-digits. The game itself was close throughout, with ‘Iolani trailing by three points at the half. Luckily, the girls pulled together defensively to pull away in the third period and never looked back. With a final score of 54-47, The Raiders took the Girls’ ILH Basketball Champion title for the second year in a row and look to hopefully repeat their state championship run.

The boys celebrated their Senior Night immediately after. Known more for its pre and post-game festivities, the contest featured a wild lower gym riled up from the previous win with the ‘Iolani student section in full force. After falling 16-3 in the first period however, the boys attempted to fight back from an early deficit. The Buffanblu went on an 11-0 scoring run early, using their size as an advantage and taking the wind out of the boy’s team. ‘Iolani’s slump was broken when Devan Fujinaka ’21 hit a three from the left wing, and the boys attempted to mount a comeback off a 16 point performance by Tyler Morita ’20. One of the more impressive drives during this comeback came off a fast break by Carter Kamana ’20 which culminated in a commanding dunk. However, the comeback would fall apart late in the second quarter when the Buffanblu hit back-to-back threes. The game was pulled out of reach in the final minutes, leading to the boys’ twelfth straight loss on the regular season. The loss, however, didn’t kill the spirits of the congratulatory atmosphere as all the games seniors were celebrated for their dedication to the program. Seniors include Tyler Morita, Wesley Yamada, Carter Kamana, Micah Camat, and Kilo Scanlan. The boys’ final game will be at Kamehameha on Friday, January 31.