The Problem with Friday Night Lights at Kozuki Stadium 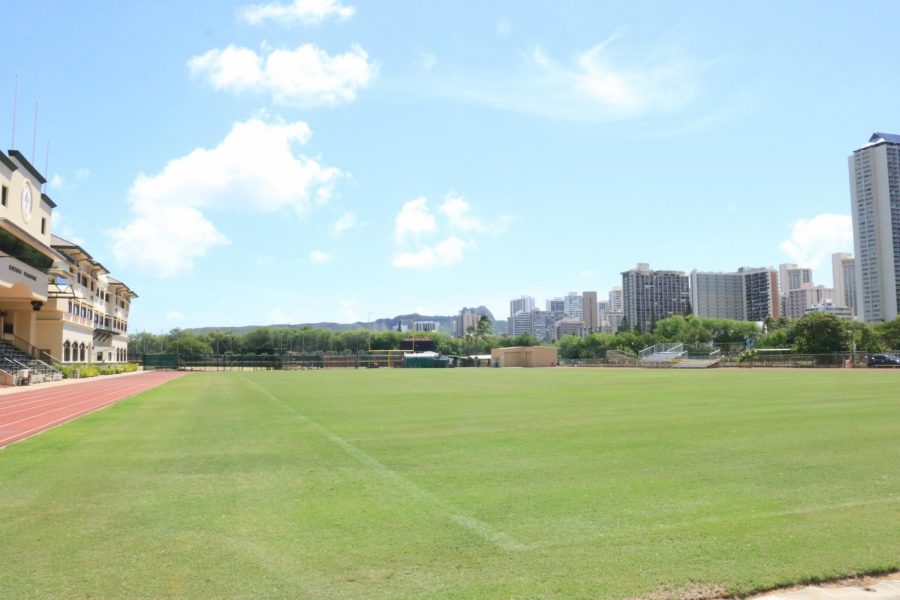 Many ‘Iolani students participate in field sports and practice into the late evening. However, by dusk coaches are forced to blow their whistles and excuse their players before darkness engulfs the field. The lack of lighting at Kozuki Stadium has limited practices and game time for generations of Raiders, so why has ‘Iolani never invested in field lights?
There have never been lights added to the Kozuki Stadium field. Track meets hosted by ‘Iolani have been cut short, and football games have been regulated to the blistering hot September afternoons. However, this is by design, as ‘Iolani wants to be respectful to the surrounding community.
As Football Head Coach and Athletics Advisor Wendell Look ’78 explains, “The condos don’t want us to have lights because of the noise. We want to be good neighbors.” Residents in the nearby apartments might complain about the bright light or extra noise traffic, putting ‘Iolani in a risky legal situation with the city of Honolulu.
Today, Kamehameha and Punahou are two of the few schools who can host sports night events, but if ‘Iolani did add lighting fixtures, the HHSAA would establish Kozuki Stadium as a primary location for night events. This change would require a greater security and physical plant presence to maintain peace on campus. But from a player’s perspective, having a home field advantage in tournaments and big games always proves advantageous, and added maintenance may just be worth the prospect of a historic win.
However, even if the athletics department considered following through with lighting up Kozuki Stadium, the installation process would be tedious and expensive, and the lights themselves would require a lot of upkeep. Lighting a football field costs around $200,000 for the lights alone, and the maintenance crew would need to additionally clean or repair the lights when necessary.
Obviously, having a football game under the lights would be a refreshing experience for the Raider Nation. All things considered though, the newfound ability to hold games and practices in the nighttime may not be worth the hefty price tag.