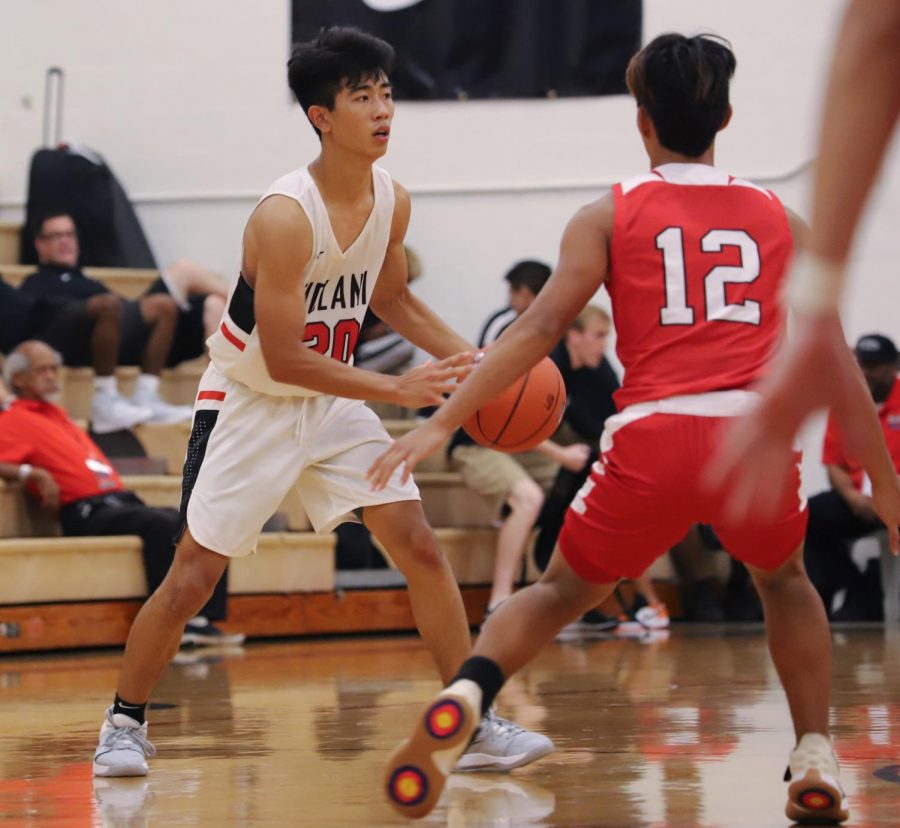 Wesley Yamada '20 dribbles down the court against Kalani

It was a trying Classic for the ‘Iolani Boys Varsity Basketball team as they finished 14th in what had become the least successful tournament in recent memory. Despite the year to year attrition that comes with high school basketball, expectations always run high for programs as storied as ‘Iolani athletics.
Those standards were not exactly met in the Raiders’ opening round loss to fellow local team Kalani, a 45-44 nail-biter. A 14-point outing by Devan Fujinaka ’21 was not enough to propel his team to the quarterfinals with a matchup against the national powerhouse, Oak Hill. It was a continuation of an unfortunate trend, with all but one of the Raiders’ losses this season coming within a single possession. The back-and-forth affair was defined by Iolani’s performance at the free-throw line, making 4 of 8 attempts from the charity stripe.
Play began in the consolation bracket against the ILH rival Mid-Pacific Owls, a preview of a future clash scheduled for January 7. It was the Owls who came away with the victory in this matchup, pulling away 52-41. Bailey Bumanglag ’22 tallied 17 points, but no other ‘Iolani player broke into double digits in the scoring column. The Raiders were able to keep the game within reach until the final minutes when an untimely scoring drought enabled the Owls to seal the win.
The lone triumph of the tournament occurred on the fourth day of the tournament when Nicholas Cheung ’21 buried a three-pointer in the waning seconds of the game to give the Raiders a 41-39 advantage over Mililani. Cheung teamed with Wesley Yamada ’20 to put down 8 triples in yet another tight contest. Trailing for the majority of the game, a furious rally by the Raiders gave the team an elusive victory after a three-pointer by the Trojans fell short at the buzzer.
The final day saw the Raiders lose another close game when they surrendered a 10-point lead to the Kamehameha Warriors by way of the Warriors’ 15-2 scoring run to give themselves a three-point advantage with 2:30 remaining to play. Yet, the ‘Iolani Raiders responded to make it a 49-48 ballgame with less than a minute remaining and a chance to take the lead. However, a turnover and a pair of free throws by the Warriors set the score at 51-48 where the Raiders were unable to get a shot off before time expired on the contest and the tournament.
The Oak Hill Warriors (VA) came away with the championship, and one of their players, Darrick Jones Jr., took home first-place in the famed dunk contest. One of several high-flying teams in the stacked field, the Warriors, and Jones in particular, thrilled fans with numerous aerial assaults on the rim.
With the ‘Iolani Classic merely being a pre-season tournament, the season continues for the Raiders as they pursue a state championship. The team took on Maryknoll in the season opener, losing 40-31 over the weekend. However, the Raiders have a chance to redeem their recent woes with an away win over Mid-Pacific today at 6:00 p.m.