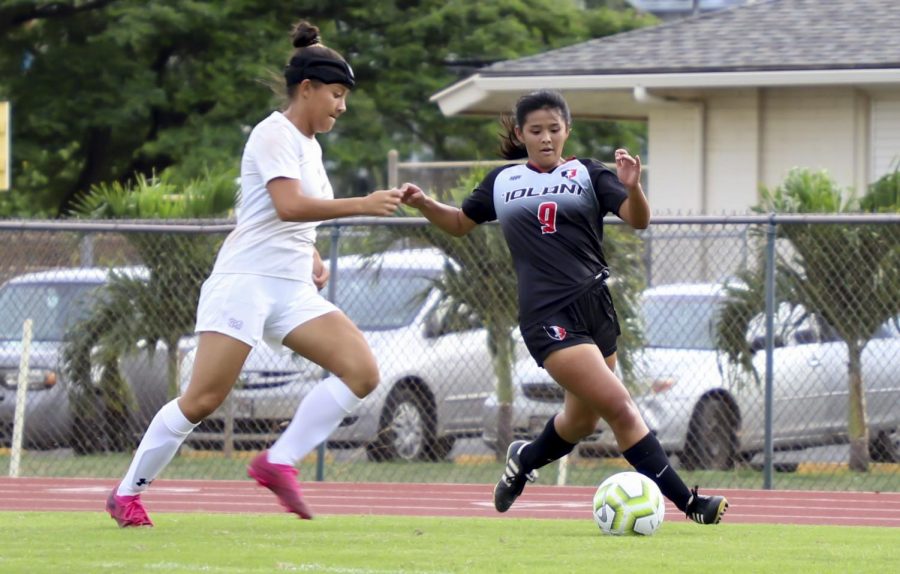 Chryssa Chiu drives down the line

On Wednesday, December 4, Raider fans crowded the Kozuki Stadium bleachers as ‘Iolani Varsity Girls Soccer team faced Damien Monarchs in their inaugural game of the 2019-20 ILH season. After only losing four seniors last year, the Raiders are hopeful to return to the championships in the upcoming months. For now though, they are making a case by starting off the regular season with a dominant 5-0 win.
The game kicked off with the Raiders’ fierceful offense and coordinated build-up passes. The first goal came from striker Sasha Asselbaye ’19 in the early minutes off a left foot strike to bottom right corner. At 31 minute mark, Asselbaye scored another point for the Raiders, increasing the lead to 2-0. Throughout the first half, the Raiders’ ball possession constantly threatened the Monarchs’ defense, culminating in a Chryssa Chiu ’20 goal with eight minutes left off a strong right strike from the penalty box which curled into the far post. With a whole half left to play, the Raiders held a dominant 3-0 lead to quickly deflate their opponents’ hopes.
The Raiders maintained equally high ball possession rate, holding the Monarchs to few offensive drives. The dominance allowed Sydni Yoshida ’22 and Kahiau Among ’20 to capitalize on goals of their own, increasing the lead to 5-0 before the final whistle. With such a commanding lead to start the season, the future looks bright for the Raiders heading into the season.