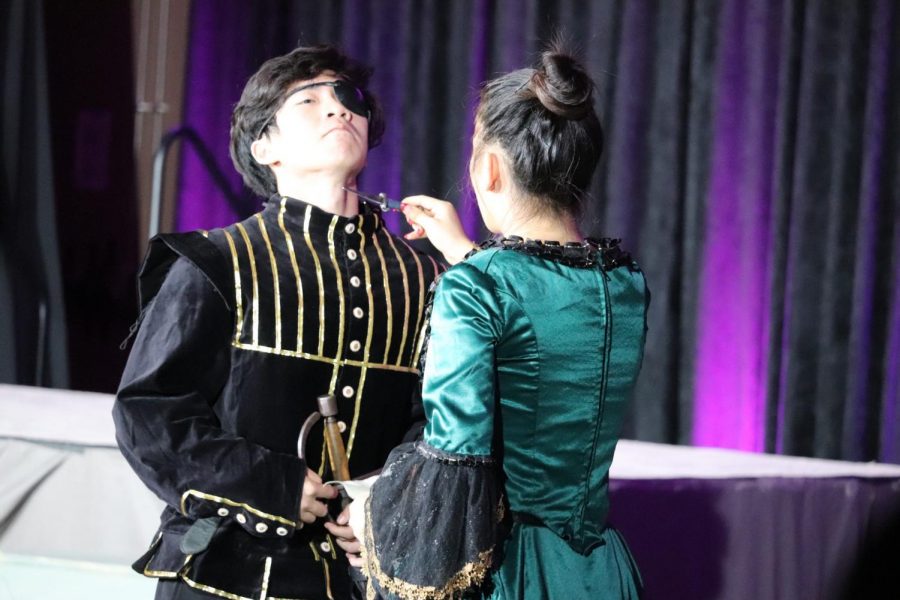 From Nov. 7 to Nov. 9, the clash of steel and cries of pain and victory echoed through Seto Hall as the ‘Iolani Dramatic Players put on their rendition of The Three Musketeers by Ken Ludwig, adapted from the novel by Alexandre Dumas. The play follows four heroes who live in 17th-century France under kings Louis XIII and Louis XIV. An action-packed, family-friendly performance that appeals to all audiences, The Three Musketeers offers more than sword fights and adventure\; it also has a hint of romance, a touch of history, and a lighthearted look into the deceptiveness of human nature. Capturing the audience with their clear and precise enunciation of the lines, the cast performed an enthralling play without allowing its themes to slip through the audience’s fingers.

The first scene begins with D’Artagnan (Culley Jones ’20) meeting with his family for the last time before leaving with his sister Sabine (Olivia Medeiros-Sakimoto ’20) to make his mark on the world as a musketeer. As D’Artagnan falls into one scrape after another, finally arranging back-to-back duels with each of the three musketeers, Aramis (Nick Hailer ’20), Porthos (Kala Chong ’21), and Athos (Charlie Duval ’22) behind the Luxembourg Palace at back to back times. Jones portrayed his character well, showing a former country bumpkin attempting to fit in to the refined bustling place that is Paris. D’Artagnan is such a relatable character, acting the poor boy in an unknown land, just trying to fit in and be chivalrous. Meanwhile, an entirely different story unravels as political forces come into play, involving the manipulative King Louis XIII (Evan Pan ’22), cruel Cardinal Richelieu (Sarp Senol ’20), and the unfaithful Queen Anne (Bonnie-Lynn Montaño ‘20). A giant chessboard is used to illustrate the power plays between the power hungry Cardinal and the weak King, with the Cardinal knocking down the King’s pieces and the King reminding the Cardinal of his place. Senol portrays his villain well, often providing comic relief in his treatment of his underlings and his battle of wits with the king. The forces of good, the musketeers, are all very unique in their personalities, despite being called the Inseparables. Chong as Porthos is a rambunctious vigilante, while Hailer as wearied Aramis is more conservative, a priest-in-training who is chased relentlessly by D’ Artagnan’s younger sister Sabine. Duval plays Athos well, a heartbroken lover turned soldier, who is now the leader of the three musketeers. All of the actors in the play performed their characters with powerful emotional execution, and together, they brought life to a complicated story.

The stage sets were beautiful, each evoking a unique mood that complemented the play’s 20 different scenes. Ranging from a farmhouse in Gascony to a Royal Palace Garden, the sets were also historically accurate, as were the props and costumes. Lights illuminating the actors were varied, with dark, scheming scenes with the chief villain, Cardinal Richelieu, portrayed in a haze of red, and the Musketeers’ many battles shown in tones of blue, the stunning effect helped to keep the play moving forward, even in times when the scenes were initially unclear.

When the actors stepped onto the stage for the final time, they brought the story back to its historical roots, explaining what happened to each individual character. This twist ending was brilliant, and the applause that filled Seto Hall was as deafening as it was well-deserved. The Three Musketeers was an unparalleled success, with great acting, scenery, and props. The ‘Iolani Dramatic Performers continue to amaze audiences with acting beyond their years, and their next performance, Almost Maine on Dec. 13, is sure to achieve the same level of excellency.