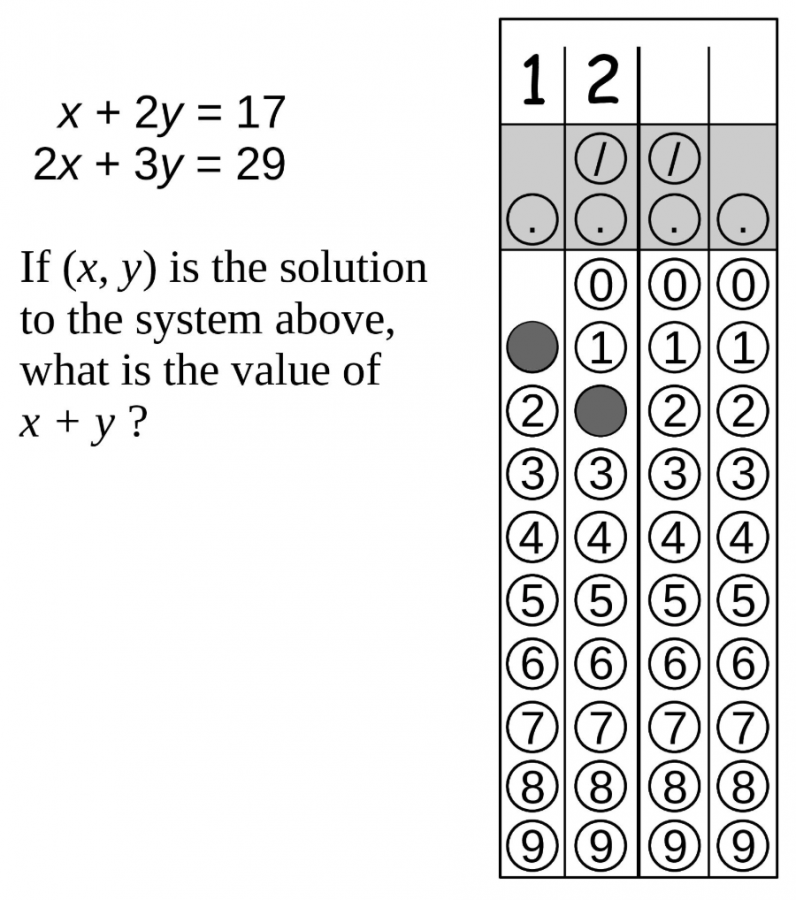 The mean number of students per classroom, y, at ‘Iolani High School can be estimated using the equation y = 0.8636x +27.227 where x represents the number of years since 2004 and  x < 10. In relation to this formula, how well do you think you did on this year’s PSAT? The PSAT’s purpose is to prepare juniors for the SAT that they will take in their senior year, but it can also offer scholarship opportunities for college. The PSAT has four sections, Evidence Based Reading, Writing and Language, Math (no calculator), and Math (with calculator), where each is weighed in the final test score. The total time for the PSAT is around three hours, including breaks and instruction. Every student will have misgivings about the test, but as they take it in 9th and 10th grade, where the results do not count, some of that stress can be alleviated.

Whether you’re a freshman who has never heard of that great, mystical test, the PSAT, or a PSAT veteran taking the test for the final time, taking the test is beneficial, no matter what grade you’re in

“We want to give preliminary practice for the ACT and SAT, which students take on their own to get them into a testing mindset. Schools that offer the PSAT in ninth and tenth grade usually do better as a whole on the PSAT and subsequent PSAT and SATs,” explained Test Preparation Coordinator Mr. Jeff Andrews.

The PSAT could influence many students’ futures, but opinions on the exam are still mixed. Not everyone is a natural born test taker, and some students struggle to cope with the pressure, but others (like Agena) gladly seize the opportunity to show what they know.

“The PSAT was better than I thought it would be. The math section was difficult, but for a first attempt, I thought I did well,” Sarah Agena ’23 mused,. Most freshmen’s test preparation consisted solely of getting a good night’s sleep and eating a healthy breakfast. However, Agena took it upon herself to review her math notes and take the practice tests that the college counselors provided. As Mr. Andrews said, “Practicing is the best way to do well on any standardized test.”

A study led by psychologist Dr. Psychology PhD ranked practice testing second most effective out of ten review techniques. With two more years to prepare for the PSAT, Agena “cannot wait to develop new study skills and do even better next year!”

Dillon Shintani ’24, contrary to Agena, planned to “wing it,” and many people in his grade felt the same way. He did not deny the importance of the test, but he believed that studying for it was not the best use of his time. While this may seem nearsighted, it makes sense that many students would prefer to study for their graded assessments over a test that is worth little more than practice.. Shintani’s strategy has its benefits, including a stress-free day and a rare full night of sleep before the PSAT, and his advice for students who have not taken the test is to “trust that what you learned in class will carry you through the test and try to do your best.”

Students in the Class of 2021 took the PSAT for the final time to be entered into the NMSQT competition. Many students would be worried about their results, but John Vierra ’21 was confident in his performance. He remembered feeling “comfortable” during the test,  a word few would use to describe taking any examination. Having faced immense pressure to perform well on the PSAT, Vierra was relieved.

“I used it [the PSAT] as a way to show everything that I have learned. I thought of it as my friend, rather than an enemy to be bested,” said Vierra. “The PSAT is nothing to be afraid of. Study for it and let your understanding speak for itself.”

The PSAT constitutes a major source of stress for many students, but it opens doors to scholarships and is great practice for more important standardized tests. In the past two years, ‘Iolani has had 17 seniors named National Merit Semifinalists, out of a total of 63 in the State of Hawai‘i. 27 seniors have been named National Merit Commended Students in the National Merit Scholarship Competition. While it may seem difficult now, taking the PSAT before eleventh grade pays off in the long run.